The High Pressure Ridges appear as clear spaces off the West Coast...

Here we are two days later and you can see the High Pressure is back off California, stronger than ever...

OK, let's take a look at a graph of California's 2014 Winter rainfall...dating back to 1970.
Notice anything odd? Last year's 17 inch rainfall has plummeted to near zero. We've shown
you why in the preceding satellite photos... 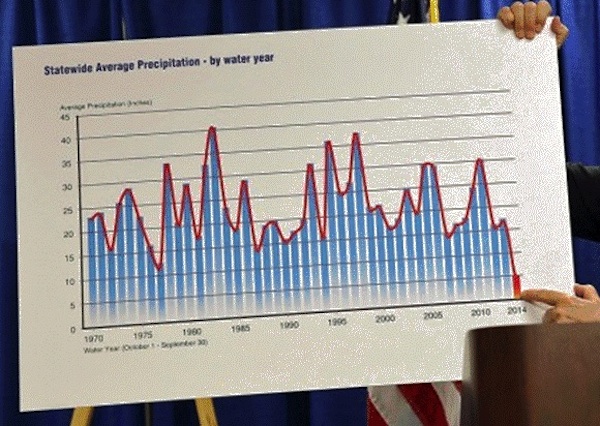 Now, let's move on to two color satellite photos from January 13 2013 when California received that
17 inches of rain and contrast that with the same view on January 13, 2014 which shows the massive
drought clearly. No snow pack means no water to irrigate the Central Valley where much of the
nation's vegetables are grown. In short, the map on the right shows a disaster.

We have now moved forward to the satellite photo of January 23 which still shows the massive
High Pressure ridge, locked (kept?) right in the same position off the West Coast. Remember
the High Pressure is circulating in a clockwise rotation, blocking that storm system and then
sweeping it straight up into Alaska and British Columbia...after which it will arc across the
Provinces of Canada carried by the Jet Stream and then ultimately dropping back down into
the center of the US.

Jumping ahead three weeks to February 18, we see a storm system coming right from
Hawaii and tracking straight as an arrow toward California and Oregon on what is called
the 'Pineapple Express' Sub Tropical storm route. As we predicted, the only significant
precipitation to hit the West Coast this winter will be from storms formed over generally
radiation-free waters in the area of the Hawaiian Islands.